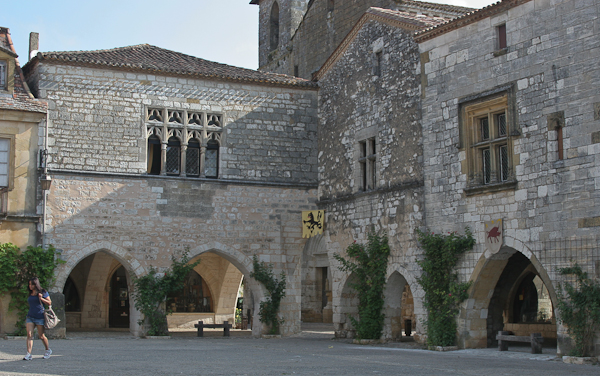 Monpazier is known as a fine example of bastide towns in southwest of France. If you want to know more about this keep on reading the next 3 paragraphs. Otherwise skip and read on after the second photograph.

»The »Bastide« towns of southwest France  comprise one of the largest collections of  well-preserved mediaeval townscapes to be found anywhere in Europe.There are said to be some 500-700 bastides in France, depending on how wide the definition is extended. Most of these are the southwest, and the majority of them were built in the two centuries from 1200 to 1400. At the time, the southwest of France was a frontier region, belonging partly to France, and partly to the kings of England. It should be remembered that until the mid fifteenth century, when the »English« were to all intents and purposes driven out of France, the kings of England, French-speaking, were actually Angevins, one of the four great French dynasties, who had moved their power base from Angers (in the Loire valley) to England, but still had large possessions in France, notably Aquitaine.

The large number of bastides in the southwest of France were set up in order to establish a more modern society in what was, at the time, a rather wild and inhospitable part of Europe. The establishment of bastides was a way for rulers to bring the population together in centres which could be more easily controlled and defended than isolated farmsteads or hovels, while helping to develop trade and other activities associated with the town. The bastides, by promoting economic activity, also allowed the lords who founded them to raise more taxes, while ensuring a better standard of living – and also more importantly the status of freemen rather than serfs – for the people who moved into them.

Since they were built at a time of relative peace and prosperity, before the start of the Hundred Years‹ War, the early bastides were not fortified; however once Anglo-French relations deteriorated into a state of on-off conflict, many bastides were fortified either on the initiative of individual occupants, who built walls at the outer end of their properties, or by the coordinated building of town walls.« ( about.France.com) 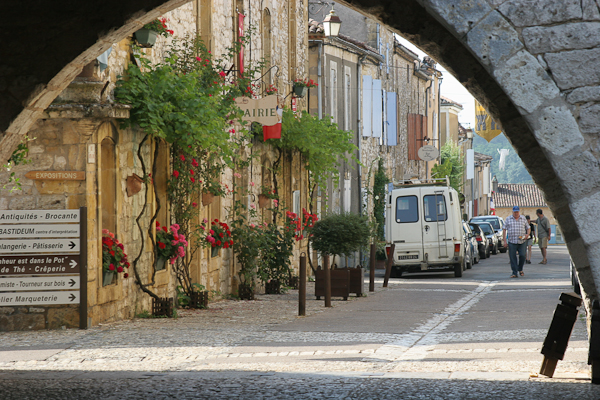 Our second plein air location was Mantpazier and as we arrived in the morning the streets were still empty and quiet. If you just took away the cars and some other modern items one could easily imagine how this spot was like in the mediavial times. 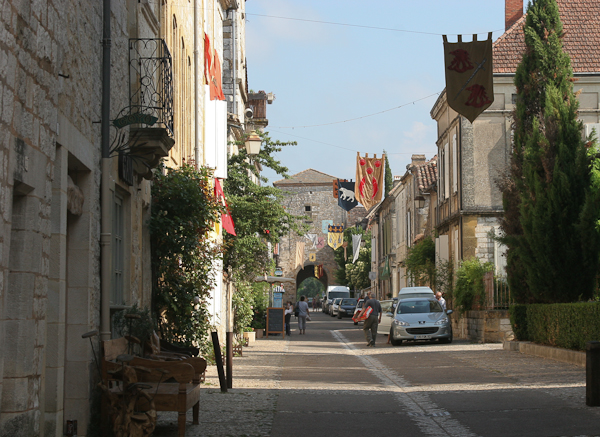 There were still banners hanging on the walls and across the street so this gave the street another touch of medivial life.

I found myself a nice spot in the shadow, perfect view and got my setup ready really quickly and was about to start when all of a sudden a shop owner across the street approached me and she seemed to be quite excited. »Je suis désolé Madam, mais mon amis….« and loads of words started coming out of her mouth. Finally I understood that I was standing right in front of her friends shop which was still closed. She would open her shop soon and were I was standing now all the clothes would be on display. ( Merde) Well, so I had to move on and found another shadow where I could somehow have the same view.

This was a very fine plein air session, because of the light, the wind and colors. Even though I had to end before I could finish my painting, because the light had already changed too much. 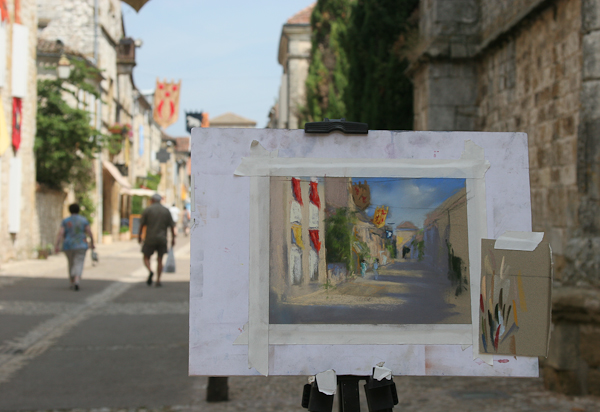