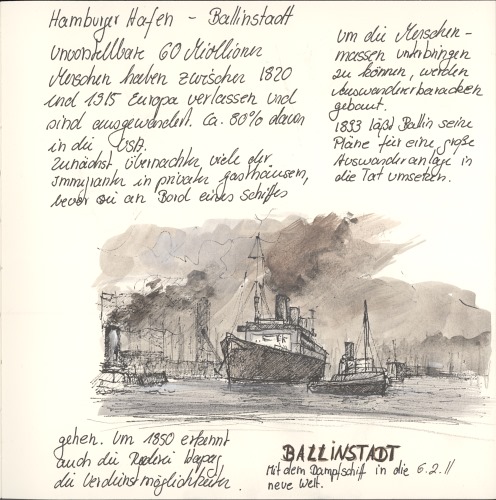 Over 48 million people left Europe and immigrated to the USA. It is hard to imagine how great their desperation and hopelessness must have been and how brave they were at the same time. I wonder what they must have thought, when for the first time they had set their eyes on the busy Hamburg harbour (in north Germany) with its sailing and steam ships.

Till 1850 most people would emigrate via England, France, the Netherlands or the port Bremen (North Germany). In 185o Hamburg recognized that emigrants were a major economic factor and seaports like Hamburg became emigrant transship centers. In 1893 after a cholera epedimie the decision was made to build special housing areas for the emigrants and set up a system to prevent epedemics.

The Museum Ballinstadt in Hamburg has rebuild parts of this aera and in their exhibition they explain why and under what circumstances people left their native country.